It's time to shine a spotlight on another of our awesome community members!

How did you discover Funkwhale?: I hope you dont mind but I like to talk and have to give a little back story. Sorry if your interview gets a little long. Dont blame me, blame the coffee!

Over the last several years I started absolutely hating Facebook and Google, just social media in general. My wife and I went car shopping one day then when I got home I noticed that there was car ads everywhere I looked when I was online. In my email, on Facebook even on frickin Hulu. I said I was done with it all and started searching how to get rid of Google. I ran across a website called Switching.social (which is now Switching.software). Which is just a list of ethical alternatives to products and services such as Facebook and Google. I ran across Yunohost. Then I ran across Fediverse Party and stewed on that for a couple of weeks. But then the concept of the Fediverse hit me like a ton of bricks and I realized just exactly what it was.

So like every other podcaster out there I started looking for podcasts about it to learn more. Found a couple but nothing that I really understood. I'm not a coder or anything like that. So I started a podcast of my own to learn about the Fediverse and self hosting with Yunohost. Then I wanted to have a podcast actually "on" the Fediverse and ran across Funkwhale.

I admit at first I was like "yeah, ok its a music player, so what?", but when I actually experienced it, it was nothing like I expected. Then I heard about the podcasting features that were on the roadmap and I knew I had to either keep a close on eye on the project or actually get involved in some way. I've been in the open source and Linux community since 2010 so I'm no stranger to it but I've never felt like I was doing my share to contribute back to it. Sure I've made logos, some minor documentation and tried to help new users in some projects but outside of evangelizing for projects I really cant do anything since I dont code and really honestly don't know anything outside of a "user's perspective".

What kind of work are you doing on the project?: I guess you can say I am consulting on the way "podcasting" works. I've been doing it since 2006 and have used several different services over the years. So I seem to have a pretty broad scope of the industry and the way the apps work from both a listener and producer perspective.

What got you interesting in podcasting?: Back in 2005 my wife got pregnant with my daughter and I got a local driving job which gave me more time to play my guitar again. I wanted to record on the computer so I started looking for tutorials and ran across some podcasts. Specifically The Musician's Cooler and Insomnia Radio. They turned me on to the Podsafe Music Network where I submitted my music and that's when I realized there are a whole lot more artists out there that are way better than I could ever be. So I took inspiration from Insomnia Radio and started The Unkle Bonehead Show in 2006 from my living room with a baby making noises in the background. The Unkle Bonehead Show grew to around 2500 subscribers and began broadcasting live on 3 internet radio stations. It then evolved into Loud and Proud which was more of comedy/talk show that ended rather abruptly with a job change back in 2014. But I kept with my love for the music podcasting by starting NTROradio and while it was sporadic it was enough that it spawned a breif radio station. I have plans to bring NTROradio back as a Funkwhale instance once the podcasting support is implemented.

I took some time away from podcasting to be a dad and started TruckinNutz and Break19 Podcast a year ago.

Now the only one I am currently producing is The Self Hosted Podcast.

What is your favorite part of the project so far?: The federation. The whole concept of being able to share and interact with other people on other instances still just blow my mind. That and being involved with Funkwhale at such an early stage in its development. I am both giddy and nervous as hell. I love it!

What do you like most about contributing to Funkwhale? And what's the most frustrating part?:

What do I like the most? Working with the real heroes of the world. People that are doing this thing as a passion and not because its a job. People like Agate that can turn a bunch of numbers and characters on a screen into something that works and brings joy to people. That's what puts smiles on peoples faces and warmth in their hearts. People like Agate and the other devs, not just Funkwhale but the Fediverse in general, those are the magicians , the sorcerers of today. They have skill and the know how to make the world a better and safer place for people like me who don't know any better.

As for frustrating? Myself. I've never done anything like this before and not knowing how to communicate my thoughts into words that a technical person will understand.

Sometimes they just don't come out right. I am a truck driver and we have always been a rather gruff way of talking to each other. We have our own language on the CB radio. So sometimes I have to remember that I'm not talking to another truck driver. 10-4? Lol, sorry couldn't pass that one up.

What do you do when you aren't Funkwhaling?:

I drive truck for a living so that eats up most of my time. But outside of that I love being a dad to an awesome 15 yr old, playing guitar, candle light dinners and long walks on the beach. Did I mention that I also do a podcast?

Who's your favorite Funkwhale mascot?: Wanda, there is no other! 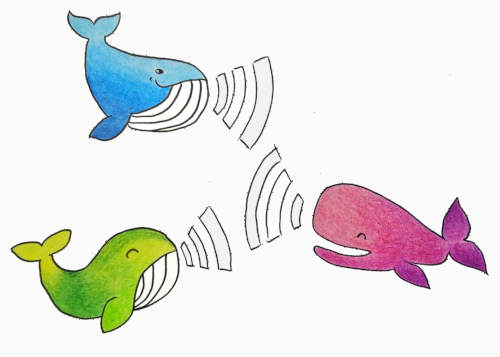 Well Sundays for me are a play day. That's the one day a week that I actually get to be in front of the computer with all kinds of windows open, recording/streaming and playing with audio. I'm an early bird so I usually don't sleep past 3am. That's when I'm doing shownotes and getting ready to record an episode of The Self Hosted Podcast. I usually wait till everyone in the house is awake before I start actually recording just to be nice. My dog is laying on the floor next to me on the right and a cup of hot coffee to my left. I am in bliss doing what I like to do, which is not sitting sitting in a chair rolling down the highway at 65 mph with a steering wheel for a desktop.

If anybody wants to check out The Self Hosted Podcast you can find it here. It's also on Apple Podcasts, Google Podcasts, Spotify and wherever free podcasts are sold!

Thank you so much, UnkleBonehead, for taking the time to talk to us and also contribute so much to the project! Stay funky, Funkwhalers!